Dueruote article on the new Italjet Dragster and interview with Massimo Tartarini. 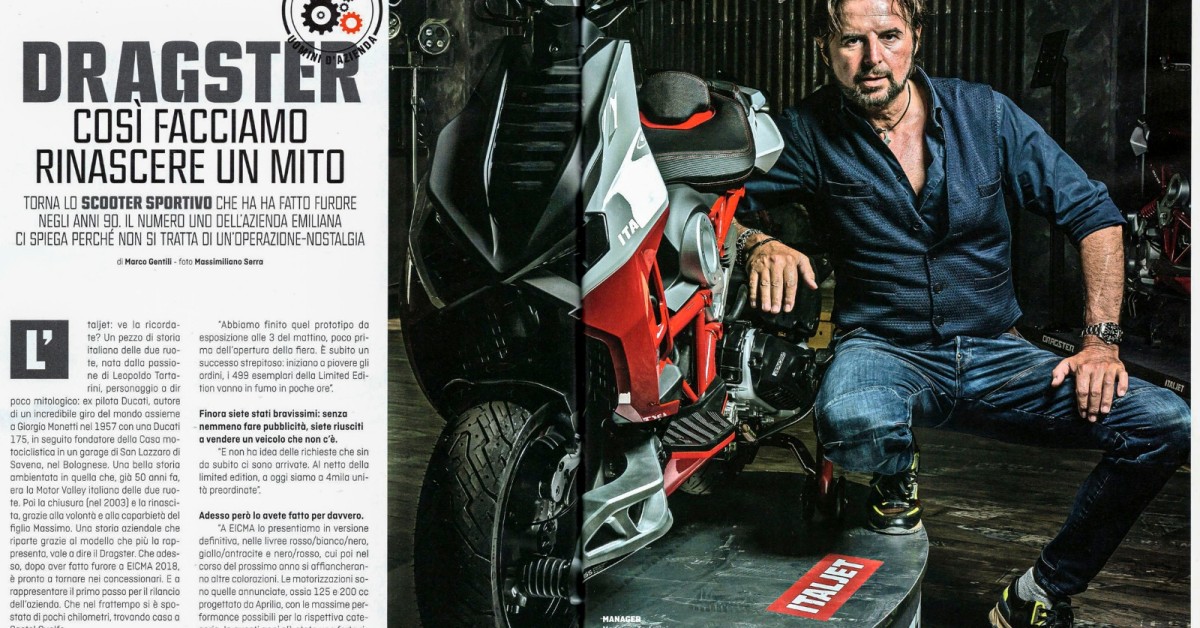 English translation of the Dueruote article on the new Italjet Dragster and interview with Massimo Tartarini for those interested to read.

This has not been professionally translated so please excuse any grammatical errors or unusual sentences I have tried to leave it as close to the original Italian as possible.

Italjet: do you remember it? A piece of Italian two-wheeled history, born from the passion of Leopoldo Tartarini, a mythological character to say the least: former Ducati rider, author of an incredible world tour with Giorgio Monetti in 1957 with a Ducati 175, later founder of the motorcycle manufacturer in a garage in San Lazzaro di Savena, in the Bolognese area. A beautiful story set in what, already 50 years ago, was the Italian Motor Valley of two wheels. Then the closure (in 2003) and the rebirth, thanks to the will and stubbornness of his son Massimo. A company history that restarts thanks to the model that best represents it, namely the Dragster. Which now, after making a splash at EICMA 2018, is ready to return to dealerships. And to represent the first step in relaunching the company. Which in the meantime has moved a few kilometres, finding a home in Castel Guelfo.

Tartarini, let's rewind the ribbon at the 2018 EICMA, when you present the Italjet Dragster.
"We finished that display prototype at 3 am, just before the fair opened. It was immediately a resounding success: orders began to rain, the 499 copies of the Limited Edition went up in smoke in a few hours ".

So far you have been very good: without even advertising, you have managed to sell a vehicle that is not there.

"And he has no idea of ​​the requests that immediately came to us. Net of the limited edition, today we have 4 thousand pre-ordered units ".

But now you have done it for real.

"At EICMA we will present it in its definitive version, in the red/white/black, yellow / anthracite and black/red liveries, which will then be joined by other colours over the next year. The engines are those announced, namely 125 and 200 cc designed by Aprilia, with the maximum possible performance for the respective category. In recent years there has been a strong demand for higher engines, but at the moment we don't want to put too much meat on the fire. It was very difficult for us to manage all product requests without having them available. A lesson that has taught us a lot. From now on we will present the news only when they are ready to be placed on the market ".

How will the stock Dragster differ from what we have seen so far?
"The engine will already be Euro5 approved, while both engines will have standard ABS".
What does this fever mean by Dragster?

"That there is a great desire for sportiness, for vehicles that are more similar to motorcycles than to scooters. With the exception of the single-speed engine, the Dragster is a motorcycle through and through. We are managing to give new life to a segment, such as that of the sport scooter, which the manufacturers did not believe in, and which enjoys thousands of admirers around the world. We want to make it clear that the scooter is not just commuting, but also means passion and vehicles with a strong personality ".
Who is your typical customer? The 16-year-old of today or the motorcyclist who had one 16 in the 90s?

"Today the 16-year-old is less interested than once in what happens in the world of motorcycles, he has lost that passion he breathed 25 years ago. And in my opinion it is also the fault of the Houses, who have no longer produced anything capable of feeding it. If we look at the European markets, the typical clientele of this vehicle is made up of 30-50 year olds, motorcyclists, who tend to be nostalgic, who do not make price the first factor in purchasing a two-wheeled vehicle. Analysing their characteristics, half of them had the Dragster in the 90s, while the other half was the object of desire. The situation is different for the Far East markets, where today the big numbers are made. There our audience is 18-20 years old and is aiming for the 200cc version. Our mission will be to rejuvenate the European public and bring passion back to the centre ".

When will it be available for sale? Prices?

"The scooter will arrive between the end of October and the beginning of November in dealerships. In Italy we count on a network of 50 dealers (who were selected by KSR, the brand's importer for Italy and Europe; ed). As for the prices, all customers who had booked the scooter will confirm the announced price list, that is 5,490 euros for the 125 and 5,790 for the 200. For all new orders, however, there will be a small upward adjustment: we remind you that in the meantime we have faced the costs related to the Euro5 homologation and, like all manufacturers of motorcycles and scooters, we pay the increase in transport and raw materials ".

You don't think the Dragster has a very high list price? How does it fit inside of the motorcycle scene?

"We do not intend to do the pricing and promotions policy. The Dragster, you can clearly see, is not a traditional scooter, but a one-of-a-kind object in terms of chassis, components and materials. Which scooter can boast Pirelli, Brembo, Paioli, Marelli and Bosch among its suppliers? I'll tell you: nobody. We want to make the Dragster an object of desire, something that you are also willing to wait for a few months to have it ".
How much will Italy count for you?

"In a global market like today's, very little. We plan to export 95% of the production. Japan, Taiwan and Indonesia will be our main markets, followed by China, while in Europe Germany and the United Kingdom are promising very well".

What makes you so sure of the success of the Dragster abroad?

"Having a network of top importers worldwide. We have chosen the best, those already used to dealing with premium brands, which especially in the Far East have welcomed us enthusiastically ".

You are still a small reality, at the level of dimensions. You will be able to stay behind all the requests, now that does the actual production start?

"Initially, we planned to stabilize on 6 thousand vehicles per year. But if to date we add up the sales forecasts from the 50 markets in which we are present, we could reach 9-10 thousand pieces. If the demand were too high, we are even thinking of quoting annual production ".

"These vehicles are only the first step towards building an articulated range. From here, a full-electric version of the Dragster will arrive shortly".

Does a market already exist today for the electric dragster?

"It is a vehicle for which we have already had many requests for years, especially from Northern Europe. It will be a very sporty vehicle, which will focus on performance rather than autonomy ".

Besides this, do you have anything else in the pipeline?
"We want to make an Adventure version, which brings the Dragster even closer to the world of motorcycles. It will be equipped with a twin-cylinder engine with a cubic capacity of 400-500 cc".

Will there be commuting vehicles in the new Italjet course?

"No. Our current identity is made up of sportsmanship, design, technology. We do not want and cannot go to war on Piaggio or Kymco, so to speak. We have to carve out a niche that the market leaders do not cover".

Electric bikes how do they fit in this picture?

"In recent years we have launched a range of premium e-bikes, highly sought after in style, and which in their small way have found a target audience. But the e-bike world is not part of our DNA, which is and will be sporty, and therefore they are no longer strategic for us ".

Let's go back to the Dragster: if we look at today's model and that of 1996, the aesthetic debts are enormous.

"There is no doubt that the Dragster, designed by the Italjet style centre, had in its lines that modernity and freshness necessary to withstand the passage of time. On the technical side, the only point of contact between this and the old Dragster is the front suspension. The rest has been redesigned from scratch. The frame, just to give an example, is totally different: it is made up of eight different components ".

The 50 and 180 2T engines of the former Dragster could be customized. Do you think there is room for working in this sense?

"Beyond the supplies for some MotoGP teams, who asked us for the Dragster as a means of moving around the paddock, it is our intention to create a brand that is also strong in the racing world. This is why we have created with Akrapovic two exhausts dedicated to the Dragster, one street legal and one racing, which cannot be used for road circulation. And we aim to create a single-make championship in collaboration with Malossi, who will supply the cylinder-piston and variator unit".

Before his return to MotoGP, the Dragster had an exceptional test driver like Andrea Dovizioso.

"Andrea has always been a huge fan of the old Dragster. When we contacted him, he gladly agreed to cooperate with us. He was not just a testimonial: he helped us a lot, grinding kilometre after kilometre and giving many suggestions to our technicians, especially on the suspension setting and the driving position". 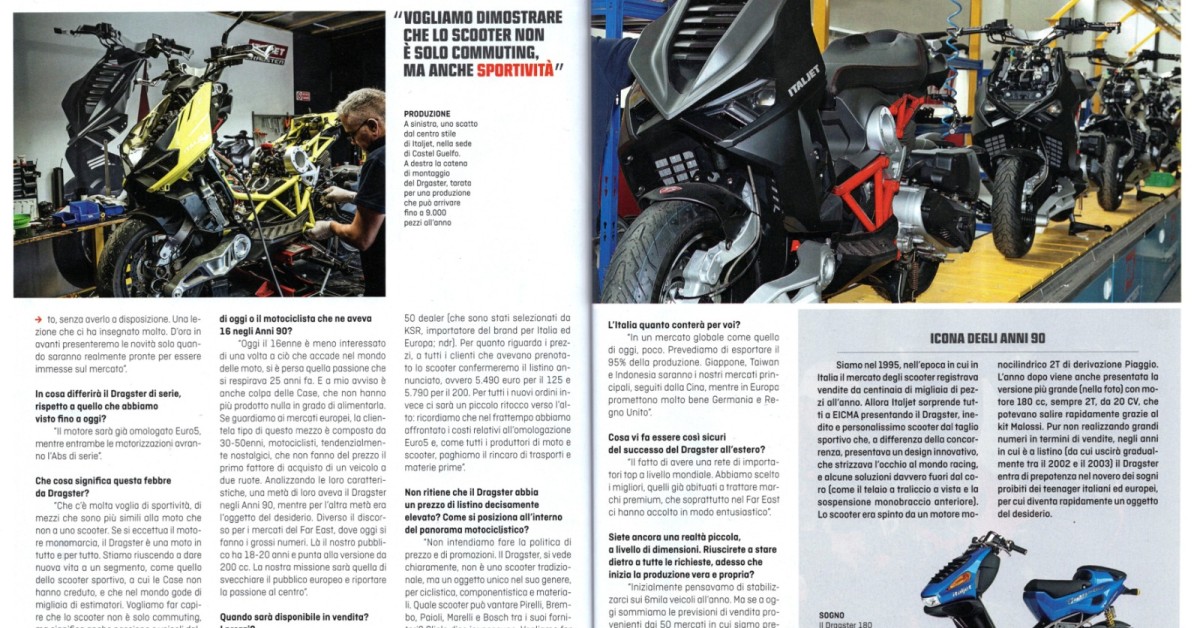 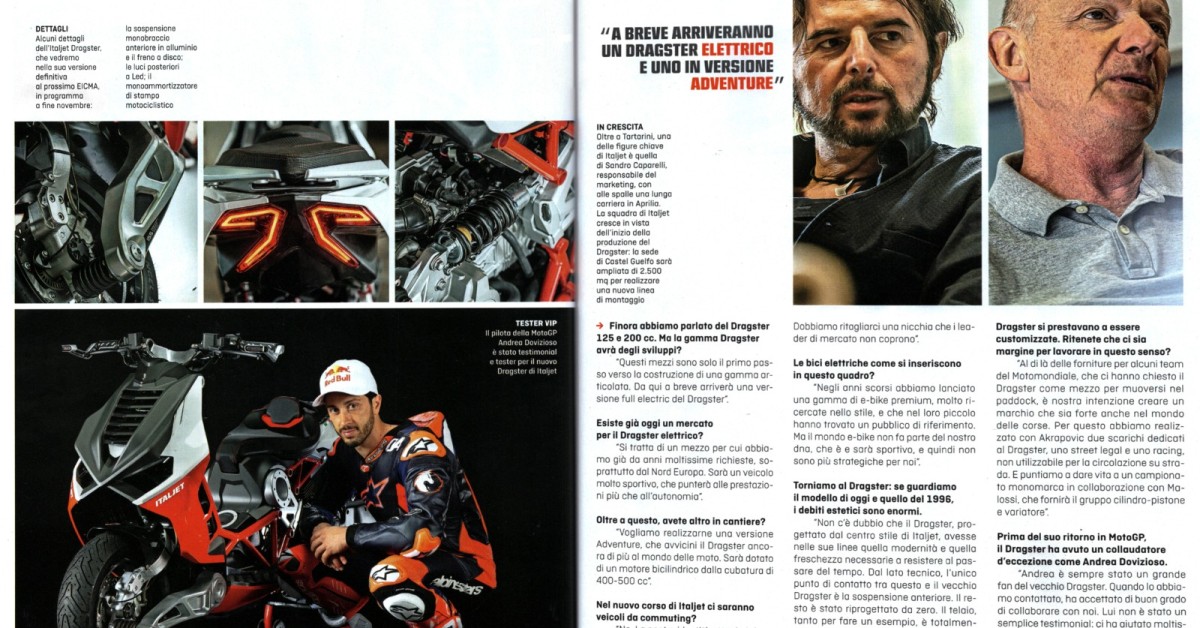 17 May
Written by Bobby Beck

We need to talk about Electric Vehicles.

Unless you've been living in a cave recently, you'll have noticed the massive rise in electric vehicles on UK roads
read more
21 Apr
Written by Bobby Beck

The Last of the road legal 125cc dirt bikes